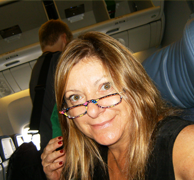 In 1999, she was recruited to the University of Calgary as the Founding Dean of the Faculty of Communication and Culture, a modern and interdisciplinary Faculty that offered a variety of programs bound together by a core set of courses. She and her team initiated both undergraduate and graduate programs that combined approaches from humanities, social sciences, and science.

In 2008, she joined Thompson Rivers University, where she now holds a cross-appointment in Communication and Tourism Management. During the past three years, her research has focused increasingly on mountain resorts and the ways in which the mountain resort experience, from various perspectives, is expressed and communicated.

She is delighted to have returned to an administrative position, but she does regret the toll it takes on her skiing life. 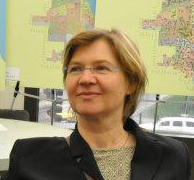 Dr. Adelheid Mers, The School of the Art Institute of Chicago, USA

Adelheid Mers is an artist who crafts useful pictures. A careful listener, she engages with individuals and organizations to locate and visualize subtle community discourses and hidden ecologies overlooked by surveys and the more common, quantitative community assessments. The resulting diagrams are both poetic and analytic, as outcomes of art-based research. This work is meant to engender further dialogue, but also play and action. To that end, diagrams are often distributed freely in poster and flyer format, and occasions are created for feedback.

Mers is also a tenured professor of cultural policy at The School of the Art Institute of Chicago, giving her a keen understanding of cultural processes on a larger scale. Over many years of teaching she has honed the conversation facilitation techniques that are brought into play in her art practice.

Mers increasingly works with non-profit clients: with the City of Chicago Mayor's office and department of Innovation and Technology she was an embedded artist, diagramming stimulus funding application and uses. Most recently, she has worked with the Evanston Art Center seeking out local arts ecologies, followed by an exhibition and public discussion of results; she explored grant making impacts on artists for the 3Arts Foundation for presentation at the Grant Makers in the Arts annual conference, and she currently works with the South East Chicago Commission, in conjunction with students in the Arts Administration and Policy Management Studio course, to diagram arts networks and potentials in 5 Chicago south side neighborhoods.

Her work is presented nationally and internationally, at conferences and exhibitions. She has curated several exhibitions, published essays on pedagogy, arts administration and art-based research and has edited and published a book, Useful Pictures. Honors include grants from the German Academic Exchange Service, the British Council, NEA and Illinois Arts Council. Since 2005, Mers has contributed to the Making Interdisciplinary Inquiry Visible research initiative, as a partner in the Community-University Research Alliance that originated at Thompson Rivers University and the City of Kamloops, British Columbia.

The Artéria workshop will integrate academic, artistic, municipal and educational partners in a reflective process with the goal to elaborate a cultural mapping project for cities of the centre region of Portugal, using a collaborative and participative methodology based on the 'Question Campaign Methodology' (created by Ceasar McDowell, Interaction Institute for Social Change, Boston, EUA).