Language is a key component in accessing education, employment, social services and for community participation. It has also been seen historically in Europe as defining individual and collective identities. The processes whereby people learn new languages and become legitimate speakers of these languages are complex. A shared understanding of these complexities across the different multilingual scenarios (including education, healthcare, youth culture, the workplace and NGOs) in which the participants of this network are working, sharpen a knowledge of how to tackle the challenges that new speakers of different linguistic varieties face in the context of a multilingual Europe. Globalization, increased mobility and transnational networking transform the linguistic ecologies of contemporary societies. Through this Action the aim is to better understand the potential social tensions that emerge from unequal access to participation of new speakers in Europe’s multilingual projects. These inequalities pose a potential challenge to European integration, social cohesion and economic collaboration, as well as to the full participation of territorial and immigrant minorities. 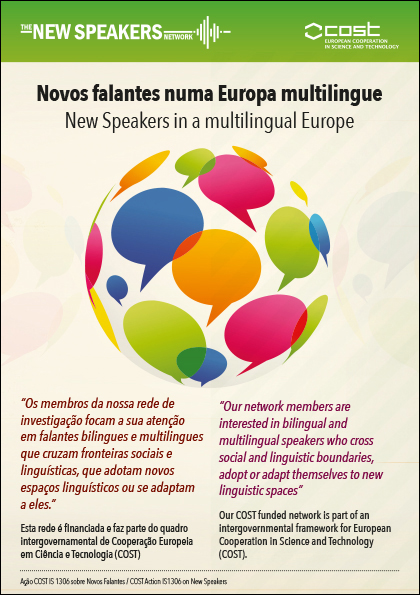 Focusing on Policies and Practices, the New Speakers' Network Final Whole Action Conference will bring together the work that emerged from dialogue and collaboration between researchers, policy makers and stakeholders working together over the past four years on the dynamics involved in becoming a ‘new speaker’ of a language in the context of a multilingual Europe. We will showcase our research findings and policy recommendations by exploring a format of joint dialogue between researchers and stakeholders. We will focus on different themes linked to the scientific activities of our Working Groups:

New speakers are multilingual citizens who, by engaging with languages other than their ‘native’ or ‘national’ language(s), need to cross existing social boundaries, re-evaluate their own levels of linguistic competence and creatively (re)structure their social practices to adapt to new, complex and overlapping linguistic spaces. In our network we have sought to understand in what ways tensions can emerge if new speakers find obstacles to fully participate in Europe’s increasingly multilingual political and economic spheres. These inequalities could pose challenges to European integration, social cohesion and economic collaboration, as well as to the full participation of territorial and immigrant minorities.
Along with these sessions, the event will include plenary conferences, local stakeholder panels on new speakers and linguistic diversity in Portuguese speaking contexts and a number of cultural events on issues around territorial and immigrant sociolinguistic minorities aimed for the general public.

The University of Coimbra

Founded in 1290, the University of Coimbra was the first – and, until the early 20th century, the sole – Portuguese language-university and classified as a world heritage site by UNESCO in 2013. Crucial in the consolidation and standardization of the national and imperial language since medieval and colonial times, the region of Coimbra and its university have been responsible for the education and training of many generations of politicians, writers and other intellectually prominent figures of the Portuguese-speaking countries worldwide. This history left lasting traces in the university, in its library, archive and museum collections, and mostly in its immaterial heritage and symbolic imagination. It hosts one of the largest international student communities in Portugal.

The Centre for Social Studies (CES) and the Humanities, Migration and Peace Studies Research Group (NHUMEP)

Headed since its foundation (1978) by Professor Boaventura de Sousa Santos, the transdisciplinary and cosmopolitan CES research community brings together about 800 postgraduate students, researchers and postdoctoral researchers from a wide range of fields (from sociology to biology, including experts in the fields of education, literature, culture and international relations, architecture, among others). At the core of CES scientific strategy is the goal of democratizing knowledge and contributing to making science a public good. CES researchers work at all levels of analysis – local, national, regional, international and global, studying the intertwining dynamics across these different levels.
With the specific aim of promoting open and active critical dialogue between the humanities and the social sciences, CES’ Humanities, Migration and Peace Studies Research Group (NHUMEP) includes researchers from – anthropology, gender studies, history, international relations, law, linguistics, literary and cultural studies, peace studies, postcolonial studies, sociology – with solid experience in this dialogue.  Language and sociolinguistic research is doubly challenged: fully grounded in language-based analyses, mostly from a linguistic ethnography perspective in the crossroads with migration studies, we explore ways in which our work contributes to the common transdisciplinary dialogue, and hence to the development of social and critical approaches to the study of language, language policies, literacy and discourse in contemporary multilingual societies where Portuguese is playing or has played a role. This includes pushing the research agenda towards the recognition of multilingual ecologies in Portuguese society and innovative ways of thinking speakers and writers, speaking spaces and speakers’ subjectivities.

Headed since its foundation (January 2010) by Vera Ferreira, the Interdisciplinary Centre for Social and Language Documentation (CIDLeS) is an independent non-profit research centre which aims at improving and deepening research in two linguistic areas: language documentation and language typology. Besides the documentation, study, and dissemination of European endangered and minority languages, CIDLeS is also engaged in the development of language technologies for scientific and didactic work on lesser-used languages. CIDLeS has three distinct research groups (CIDLeS Media Lab, Language Documentation and Typology and Language Revitalization) whose projects are interrelated with the aim of fostering interdisciplinary research. Apart from the organisation of conferences and workshops on endangered languages and linguistic research, CIDLeS gives training in language documentation, data processing and management, archiving, coding, and language revitalization.